skip to main | skip to sidebar

Green Isle is small town situated in Sibley County in southwestern Minnesota, between the towns of Hamburg and Arlington on Highway 5. With a population of a little less than 500 people, it’s a farming community like many others in the area.

One of the things that makes Green Isle such a special place is its rich history and its deep love of baseball. Green Isle has fielded a baseball team for as long as anyone can remember. The people who live there have always known baseball and whatever changes the town has undergone, baseball remained a constant.

Green Isle was settled by Irish immigrants, brought to Minnesota by Father John Ireland in the mid 1800's. The early settlers had to contend with harsh winters, hot summers and even hostile Indians. The first Pioneers can still be found in the cemetery of Saint Brendan's church, with its tall steeple it is arguably Green Isle's most recognizable landmark.

Baseball has probably been played in Green Isle for more than 100 years. The Green Isle Record reported box scores as far back as the early 1900’s. The term “town ball” was a label given much later but is accurate because many of the areas small towns played against each other and it became a source of pride for the towns and surrounding communities.

Early players such as Hank Harnish and a few of the O’Meara boys played well into their late 30’s and early 40’s. It wasn’t uncommon to see a First Baseman or Pitcher playing past 50. The baseball played in Green Isle was always competitive and it is said that some of the old timers could have turned professional if only the big clubs had seen them play.

There is a story, that when Ted Williams was with the Minneapolis Millers as a minor leaguer in 1938, he took a car trip to Green Isle to play a friendly game with the team. It is said that he hit a ball so hard and so far, it hit the old school building which would have been about 475 ft from home plate by some estimates. After the game, he complimented the boys and called them “real good ball players”.

If you have the opportunity on a sunny Saturday in June, take a drive to Green Isle, find the ballpark across from St. Brendan’s Church, buy a ticket for a few bucks, grab a cold beverage, take a seat in the stands and enjoy a couple hours of baseball heaven. You’ll find the people are very friendly, the baseball is high quality and the magical atmosphere will surpass your expectations.

Green Isle is a Minnesota treasure. 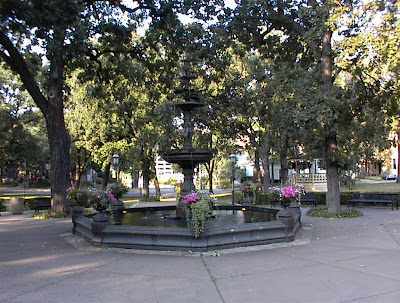 One of the most beautiful parks in the city is a small green place surrounded by old Victorian Houses and nestled quietly within walking distance of downtown Saint Paul and West Seventh Street (Old Fort Road) and located near the famous Forpaugh's restaurant.

Some records have Irvine Parks original establishment on drawings as early as 1849, but it wasn't officially finished until an early spring day in March 1872 when the square was dedicated and named "Irvine Park" in honor of its donor John Irvine. A new fountain was installed by the Pendergast brothers in 1881 at a cost of $900.

The Park was established as a New England style town square park and was surrounded by the stately Victorian mansions that bordered its edges. The large homes were symbols of Saint Paul's early wealth. The homes, park and surrounding area were the center of affluence in the city. 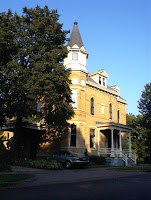 As the wealthy began to move away to "better" new locations such as Grand and Summit Avenues, the area gradually deteriorated. By the 1970's the park had become a home for vagrants and rusty playground equipment. By this time, 96 percent of the areas properties were listed as sub-standard by the City. In 1927 the original Perdergast fountain was removed and its metal scrapped when the park was re-designated a "playground".

The area had already been tagged for urban renewal when locals and planners began to recognize the area’s historic significance. The entire area was nominated to the National Register of Historic Places in October 1973 and in 1981 it was given Heritage Preservation statue.

The Robinson Iron Company of Alexander City, Alabama, was contracted in 1978 to cast a new fountain. The new fountain is not an exact replica of the original but resembles it in height and design. The cost of the replacement fountain 100 years after the original was built, was approximately $40,000. Through the work of the local community, Mayor George Latimer and many others, the Park was re-deditcated on October 1, 1978.

Taking a walk in the park now is like a stroll back in time, when simply being in a beautiful place could lift your spirit. Its mature trees, spectacular fountain and inviting Gazeebo in addition to its views of downtown and the river make this Park a Minnesota Teasure.
No comments:
Home
Subscribe to: Posts (Atom)